Ten years ago today, these two young kids tied the knot. Ten years, three kids, multiple moves, and a mortgage later, here we are. We look a bit more tired, wrinkles are coming in, the hubby has an amazing beard and I have a nice sprout of gray hair that I glare at every day in the mirror. But we’re still here with no plans on giving up.

Oh, there were plenty of times we wanted to give up on certain situations or things during our marriage, but not on each other, and definitely not on God. We learned the art of not giving up at the wedding itself in the most hilarious fashion.

Like most weddings, we wanted to light a unity candle during the ceremony. But the wick of the candle was incredibly short and what should have been a quick three seconds, actually turned into three minutes (We watched the wedding video months later, and timed how long it took. Three minutes exactly). And when you’re up on stage, wearing fancy clothes, with everyone staring at you while you’re literally holding fire, three minutes is a stinkin’ LONG TIME! My face in the picture below basically says it all.

I wanted to give up, I even put the candlestick down and made a joke to our wedding guests that we should just pretend it’s lit. But Stephen was determined that we light it. So I grabbed my candle and finally, after what felt like forever, we got that thing lit.

And in the ten years since, the challenges have come and gone. They knocked us down a couple times, but we got back up. Like the time we were in Michigan, living on very little money and food stamps, and not hearing from all the jobs the hubby applied for, but we still didn’t give up.

Then there are the times when parenting is just hard.

Or when I want to quit writing altogether.

Or when medical stuff keeps coming up.

It’s easy to give up. But when you have God and each other, giving up just isn’t an option.

“Blessed is the one who endures trials because when he has stood the test he will receive the crown of life that God has promised to those who love him.” – James 1:12

We still have that unity candle, and yes, the wick is still short. I smile when I see it, thinking back to the three minutes we spent lighting it, and I love the lesson it has brought.

So here’s to ten more years. And ten after that, and so on. Happy Anniversary, babe!

2 thoughts on ““It started with a unity candle…” Looking Back on 10 Years of Marriage.” 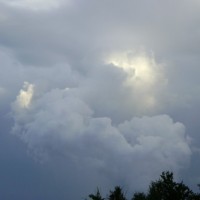